TOULOUSE, France, July 11, 2022 – Universal Hydrogen Co., the company leading the fight to decarbonize aviation through the adoption of hydrogen as a universal fuel, today announced the inauguration of its engineering design center and European headquarters in Toulouse, France. Located in the historic Hangar B16 at Toulouse-Blagnac Airport, the event was attended by industry leaders and dignitaries. Universal Hydrogen also debuted its newly-liveried ATR 72 test aircraft used for developing the hydrogen retrofit kit and hydrogen module operational handling experiments. 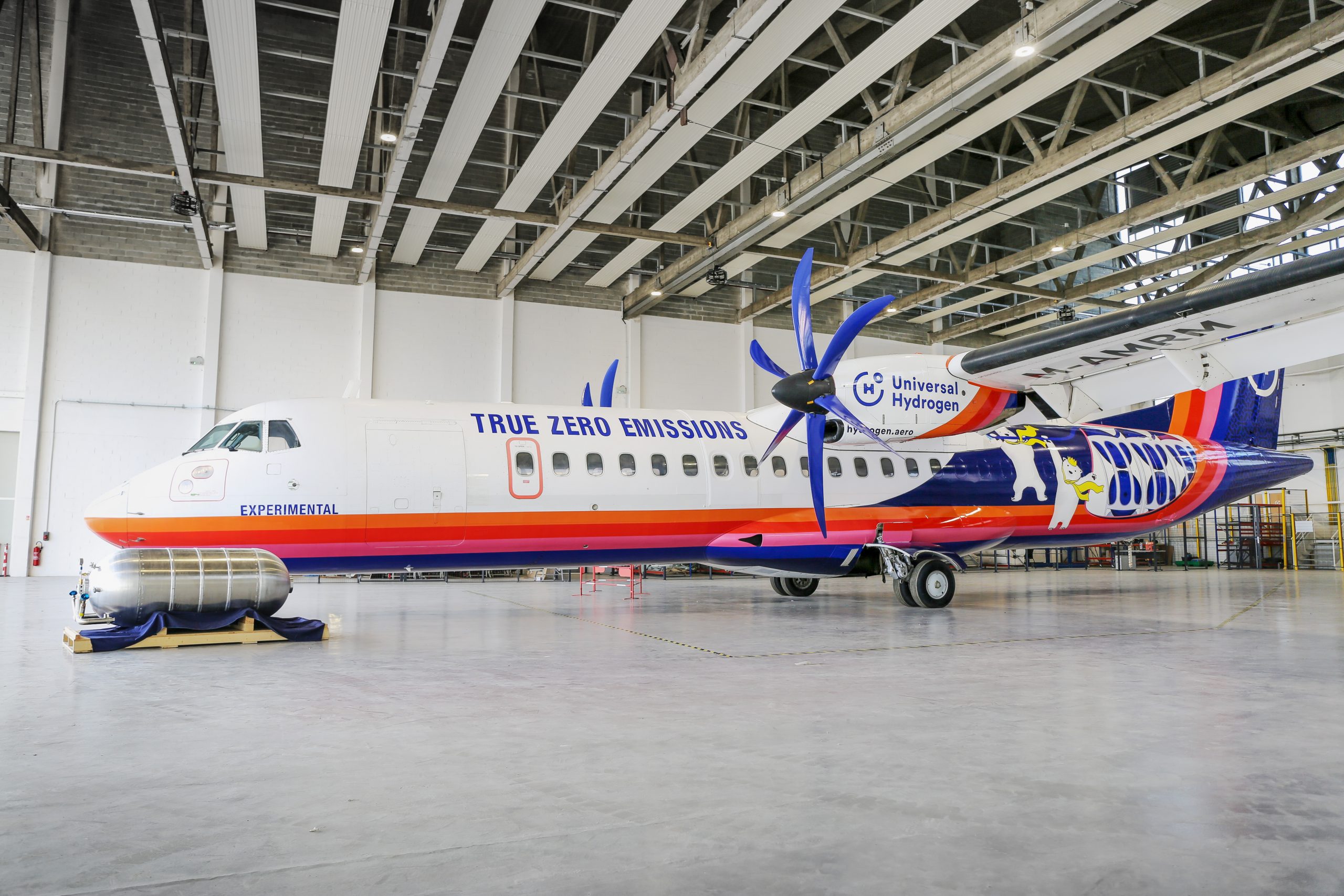 “Toulouse is the cradle of the European aerospace industry and has been an essential element of our talent and partner strategy,” said Paul Eremenko, co-founder and CEO of Universal Hydrogen. “We’re eager to showcase our progress toward decarbonizing aviation.”

Additionally, the opening event highlighted Universal Hydrogen’s liquid hydrogen modular capsule technology as well as the company’s renovation of the historic B16 hangar. The liquid hydrogen capsule development is one of the key focus areas for the Toulouse team and has exceeded key performance targets in latest full-scale prototype testing. Hangar B16 was originally built in the 1940s and was first used as a civil hangar for aircraft maintenance before being occupied by Airbus during the development of the Guppy and the Caravelle. After the opening of today’s Toulouse-Blagnac Airport in 1953, the hangar was modified, elevated, and divided into two separate facilities in the 1960s. Today, it remains one the most historic and storied buildings on the airport. Universal Hydrogen honors this rich legacy by making B16 the crucible of a new era of zero-carbon aviation.

“The EU has taken a leading role in developing hydrogen as a near-term decarbonization option for transport applications, including aviation,” said Pierre Farjounel, General Manager Europe of Universal Hydrogen. “This is one of the main reasons we chose to have a significant EU footprint for Universal Hydrogen and we are keen to leverage Toulouse’s historical role as a leader in aerospace innovation to position the region as a leading hub in climate tech.”

“The Occitanie Region has always been a pioneer in aviation. More than ever, we want to pave the way for zero-emission flight and place sustainability at the heart of the industry,” said Occitanie Region president Carole Delga. “We’ve been committed since 2018 to developing hydrogen technologies in the Region and we are delighted to welcome in Occitanie, Universal Hydrogen, one of the leading players in the decarbonisation of aviation.”

About Universal Hydrogen
Universal Hydrogen is making hydrogen-powered commercial flight a near-term reality. The company takes a flexible, scalable, and capital-light approach to hydrogen logistics by transporting it in modular capsules over the existing freight network from green production sites directly to the airplane anywhere in the world. The company is targeting regional and narrowbody/single aisle airplanes as the near-term and most impactful decarbonization opportunities. Universal Hydrogen is also working to certify a powertrain conversion kit to retrofit existing regional aircraft to fly on hydrogen.

Wall Street snapped up thousands of homes across America
The Pentagon’s FY2023 budget request for hypersonic-related research is $4.7 billion
Additive Manufacturing at industrial scale
The world economy is expected to average annual growth of around 3.2% in the decade ahead
The U.S. is behind China on hypersonic weapon technology
Open Source eCommerce as a Viable Alternative
Market Size Matters

The Battery Show and Electric & Hybrid Vehicle Technology Expo North America, September 13-15, 2022, Novi, Michigan
SCTE Cable-Tec Expo®, October 11-14, 2021
ADAS & Autonomous Vehicle Technology Expo, June 21-23, 2022, Stuttgart, Germany
Communic Asia 2022, Asia’s leading technology trade show, June 1-3 2022, Singapore Expo
SCTE Cable-Tec Expo 2021 will take place October 11-14 2021 in Atlanta
We use cookies on our website to give you the most relevant experience by remembering your preferences and repeat visits. By clicking “Accept”, you consent to the use of ALL the cookies.
Do not sell my personal information.
Cookie SettingsAccept
Manage consent

This website uses cookies to improve your experience while you navigate through the website. Out of these, the cookies that are categorized as necessary are stored on your browser as they are essential for the working of basic functionalities of the website. We also use third-party cookies that help us analyze and understand how you use this website. These cookies will be stored in your browser only with your consent. You also have the option to opt-out of these cookies. But opting out of some of these cookies may affect your browsing experience.
Necessary Always Enabled
Necessary cookies are absolutely essential for the website to function properly. These cookies ensure basic functionalities and security features of the website, anonymously.
Functional
Functional cookies help to perform certain functionalities like sharing the content of the website on social media platforms, collect feedbacks, and other third-party features.
Performance
Performance cookies are used to understand and analyze the key performance indexes of the website which helps in delivering a better user experience for the visitors.
Analytics
Analytical cookies are used to understand how visitors interact with the website. These cookies help provide information on metrics the number of visitors, bounce rate, traffic source, etc.
Advertisement
Advertisement cookies are used to provide visitors with relevant ads and marketing campaigns. These cookies track visitors across websites and collect information to provide customized ads.
Others
Other uncategorized cookies are those that are being analyzed and have not been classified into a category as yet.
SAVE & ACCEPT